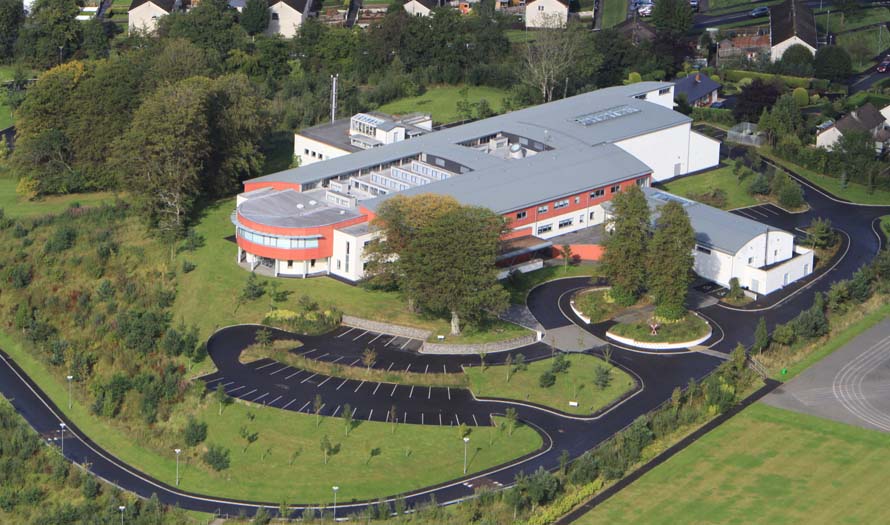 St Fanchea’s College is a new build second level all girl’s school for 350 pupils, located on a wooded drumlin on the outskirts of Enniskillen town. The building is a two storey structure with a gross floor area of approximately 5,764 m2.

The school provides 22 centrally timetabled classrooms. However, in order to satisfy the requirements for the building to be easily upgraded to accommodate an enrolment of 500 pupils, 4 specialist classrooms were provided as general classrooms.

This modern college building has been designed to create an undisturbed, inspirational, reassuring and stimulating learning environment.

Traditionally, in school buildings, the architectural form of the sports hall and the assembly hall has been difficult to deal with. Their required volume makes them relatively bulky elements, which can jar with the much smaller scale elements of the classrooms and office accommodation. By placing these areas within the middle of the plan- they not only act as new courtyards, affording the kids the ability to see from one side of the school to the other, but their sheer size is disguised behind the class room blocks. This also provided the opportunity to top light these spaces.

At every opportunity, daylight is brought into the building – by clerestory lighting from high level down through the voids to the corridors at ground floor — by clerestory lighting within the first floor classrooms – by vision panels into the sports hall and assembly hall at high and low level — by roof lights over the Technology and Design area – by top lighting the dining hall of the school meals accommodation. In all these areas, we wanted to bathe the building in fresh, natural daylight. However, in the oratory, which being the spiritual heart of the building has purposely been located at the physical heart of the plan, daylight has been much more controlled and modelled for effect.

Internally, the use of colour has also played an important role, both as a tool for energizing the spaces and as a coding device, or communication tool for identifying were you are. Wanting to capture the sense of community that existed so strongly in the school’s old building, it was important that the new school would not in any way feel institutionalized. As such, each subject suite is colour coded, thus grouping areas together visually and creating a family of spaces, all under one roof. In each classroom, the classroom door, a feature wall, the floor coverings and the fitted units all relate to the subject colour. And due to the strong forms of the spaces that we created, we were able to use confident colours that contained a body of strength, almost working as a statement. We hope that accordingly, that sense of confidence will reflect on the pupils.

Throughout, Woodvale Construction worked in tandem with the Integrated Design Team, resulting in a project that was completed on time, to budget and of the highest quality
Karl Pedersen, Mullarkey Pedersen Architects