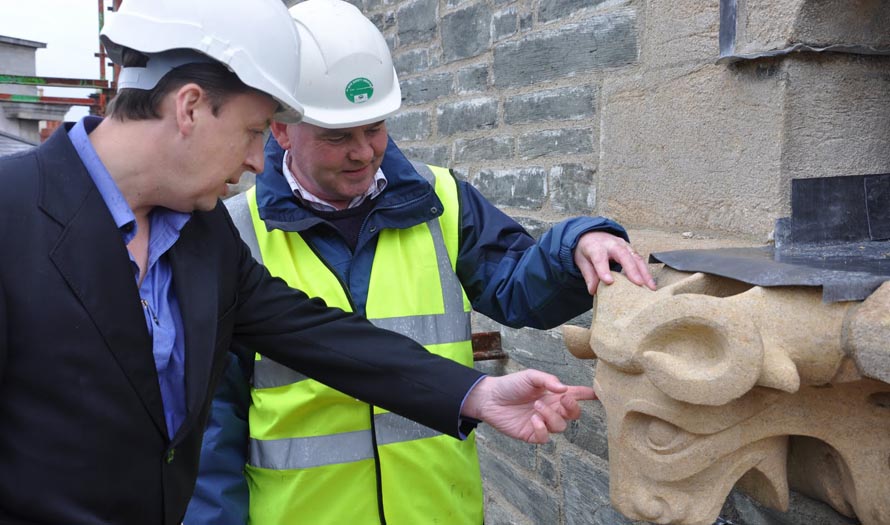 Dominating the skyline on all approaches to the City of Londonderry is Saint Columb’s Cathedral, which has stood on its prominent site inside the famous Walls of Derry since 1633. Historically and architecturally, this is the most important building in Londonderry and the North West of Ireland.

Thanks to a painstaking conservation and restoration project undertaken by Woodvale Construction and completed in June 2011, this Grade A Listed Building is now the “jewel in Derry’s crown”.

We are extremely proud that St. Columb’s Cathedral was awarded the 2011 Construction Excellence Award for Restoration.

The complex restoration process involved extensive stone repair and replacement works, removal of pointing and cement render, and the re-pointing of the stonework to the entire elevations using lime mortar.

Internally, the extensive process of restoration included for the restoration of the leaded stain glass windows, replacement and remedial works to the internal doors, renewal and remedial works to the internal plaster and finishes, the sealing of stonework, internal decoration, the restoration of the floor tiling, the cleaning of existing timber roof trusses and ceiling panelling and the renewal of both mechanical and electrical services.

Karl Pedersen, Mullarkey Pedersen Architects, stated: “If ever a project was to demonstrate the huge project benefits to be gained from a collaborative working relationship, particularly on a restoration project, St. Columb’s Cathedral is the project to cite. Every single cm2 of the building face has been appraised, considered and acted upon in a collaborative manner which, in my opinion, has been a key driving factor in the success of the scheme. The standard of finish achieved by Woodvale Construction and their team has been first class.”

I could not thank Woodvale Construction sufficiently for their brilliant work and for their respectful, personal, friendly, helpful and accommodating manner with which they carried it out. They simply could not have been more understanding, more helpful, more flexible, always going not only the second mile, but the twenty-second mile
The Very Reverend William W Morton, Dean of Derry & Rector of Templemore