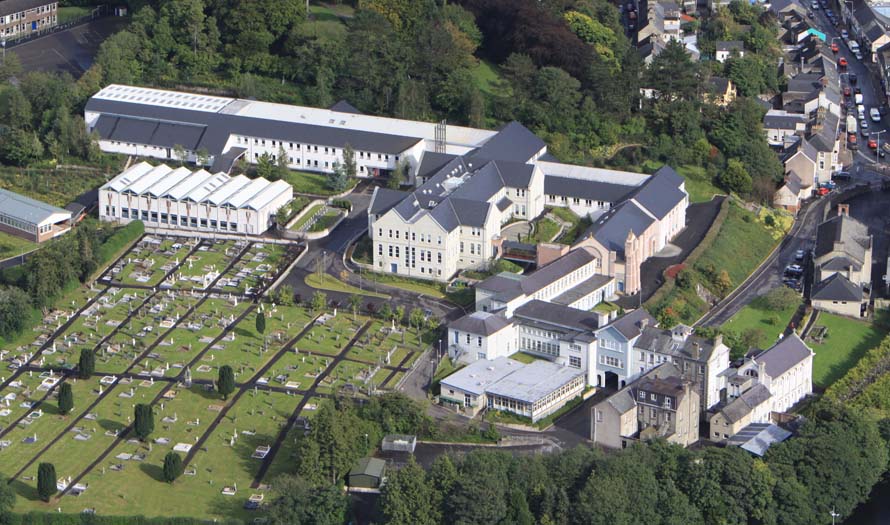 A large extension was provided to the existing school as phase one of the works. Sections of the existing school and the newly purchased adjacent St Frances school were renovated in Phase two, and large areas demolished and new buildings provided in phases three and four. Defunct mobile classrooms, which had reached the end of their useful life, were removed from site and responsibly disposed of at the end of the contract.

This site is one of the most restricted we have worked in. The main vehicular and pedestrian entrance into the school was the only way to reach the site and so was shared with pupils, staff and visitors to the school.

The access to the site for the new build extension was up a steep incline, and so materials and plant had to be craned into position until a temporary access road could be built. Several existing trees had to be retained and protected throughout the work.

Access to another part of the site was through a large stone archway, which restricted the size of plant and materials which could enter. On several occasions we had to crane plant and large components over the arch. These lifts were carefully planned, programmed to occur outside normal school hours and all non-essential personnel excluded from the area.

Internal finishes were plaster and paint on walls with hard tiling in wet areas, plaster slab, skim and paint on ceilings, linoleum, carpet tile or sheet and hard tile on floors with timber skirting.  Mechanical and electrical installation together with lift provision.

I would describe Woodvale Construction Company Ltd as an exemplar contractor for any construction project. They have a particular expertise for Education sector projects and for Conservation projects. Their approach, attitude and respect for the job in hand is always first rate. They complete their projects to programme, on budget and to the highest standard, They are a contactor who find solutions in projects, not problems.
Karl Pedersen, Mullarkey Pedersen Architects