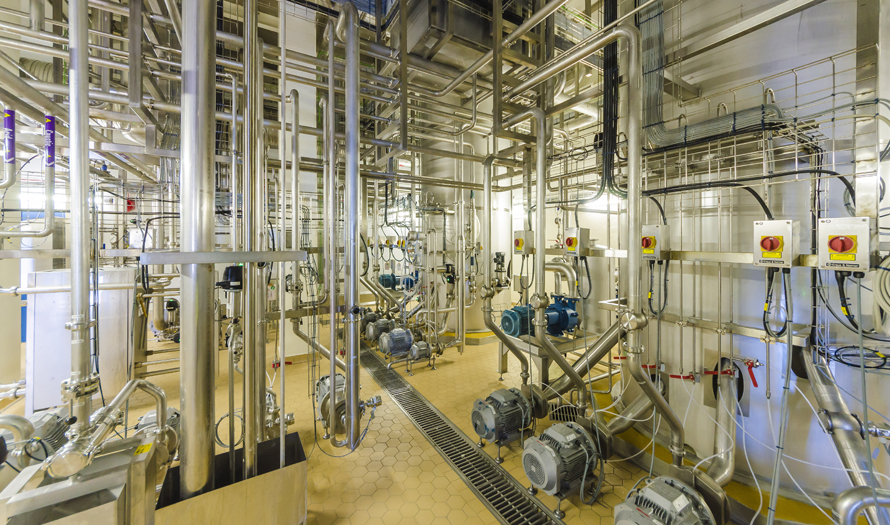 Construction of this £37m state of the art plant has more than doubled production capacity in the existing facility, which exports all over the world. The new drying plant enables the site to extend their current product range to include instantized powder.

The plant is entered through the staff accommodation which includes rest and changing facilities and a hygiene station. A protected lobby leads to the hygienic food production facility and wet process room, evaporator plant, powder transport, bagging plant and lorry loading bay.

The facility was constructed in the existing operational site. We planned the works collaboratively with the client. We segregated our site from the operational facility, forming a separate site entrance controlled by a gateman who coordinated deliveries to timed delivery slots. During the commissioning period, good housekeeping was of the utmost importance to prepare for the first production run on milk.

The building sequencing was built around the installation of the plant. In terms of buildability, the biggest challenge was planning lifting and cranage. 500t, 350t, 100t and 80t cranes were used to lift the larger and heavier plant. we held twice weekly co-ordination meetings to plan deliveries from France and Germany, including routes from the harbour to site. The concentrate tanks and evaporators at 28m high and weighing over 30 tonnes, required a two crane top and tail lift to get them safely into position.The steelwork was erected and sections of the floorplates installed using a 100 ton Liebherr crane with hydraulic fly jib to reach the 34m roof height.

The project demanded detailed coordination and space allocation between all major subcontract packages, and GEA, the installer of the specialist processing plant. This ensured construction and production deadlines, and budget, were met.This plant has one of the lowest carbon footprints in the dairy industry, as Biogas produced from diary waste powers the CHP plant. During demolition, Materials were reused or recycled as far as possible, and off-site prefabrication was maximised to ensure a factory standard finish and minimise waste.

This project was awarded the CEF ‘Best Commercial Project’ Award 2017.

Woodvale Construction worked closely with the project management team, the designers and sub-contractors to ensure that where the client requested design changes, they were swiftly facilitated.
With the bespoke nature of process engineering, last minute design changes were needed at several stages during construction. With an open book approach on costs and co-ordination between all teams helped keep everything running on time and budget