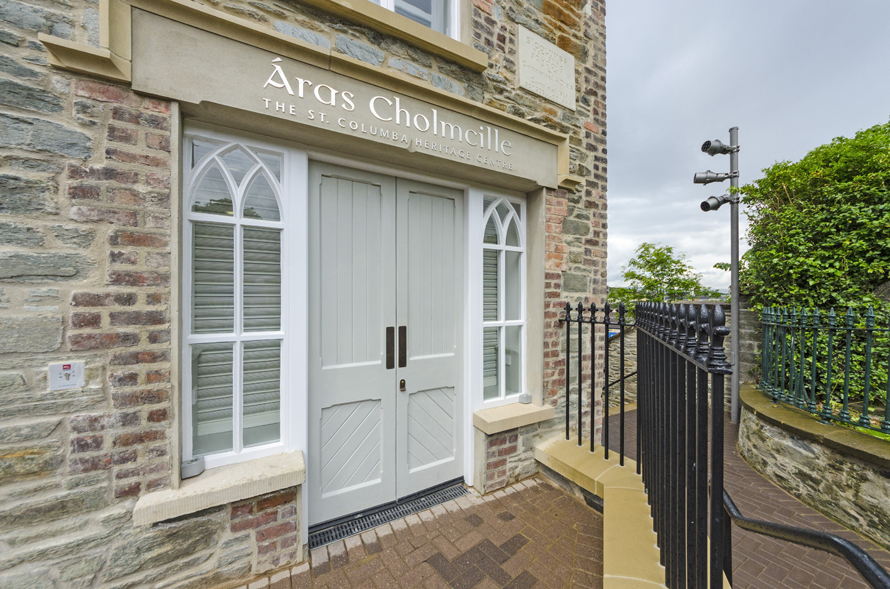 Aras Colmcille was on the buildings at risk register when we first started on site in 2013. The grade B2 listed building was the former site of St Columb’s National school (constructed 1820 – 1839.) It was used as an infants’ school until it was closed in 1989. Known locally as “the wee nuns,” it is one of the oldest surviving school buildings in the city of Derry.

The building has been designed to provide an engaging, informative experience for visitors and forms a valuable contribution to Derry’s tourist experience.

When we started on site, the building was derelict and unsafe. No operatives could enter the building until a steel façade cage had been erected around the building perimeter to stabilize it. Steel beams were inserted through the building and a Cintec wall anchor system bound the walls together and secured them to the new steelwork.

Once safe access was possible, asbestos was removed from the building and the permanent underpinning and stabilization works could commence. This element of the works carried risk in terms of Health and Safety and to the building itself: the stone faced rubble walls were in poor condition and in danger of collapse. The original basement floor level was reduced and existing walls were sequentially underpinned with concrete. The basement was tanked, a new concrete floor built and internal masonry walls built off the concrete slab.

The poor condition internal timber floors were then removed and steelwork was inserted off the top of the new basement structure and tied back to the existing walls using a Cintec wall anchor system. This steelwork supported both the new ground and first floors and permanently secured the existing walls.

Successful completion of this project represents the ultimate in recycling – bringing a derelict building back into reuse, contributing to the regeneration of this area of Derry and providing a valuable resource for visitors and locals alike.

We retained and reused as much of the original fabric as possible, including windows, roof and floor timbers. Existing roof ridge tiles were retained and reused. We fabricated exact replicas of windows that were beyond repair whilst training joinery apprentices in these skills.

Risk was carefully controlled throughout – movement in the walls was monitored and the underpinning works sequenced to reduce risk as far as possible. Through this careful and methodical process the entire external stone envelope was retained and stabilized.

The site itself was split level, very restricted and difficult to access. The contractor’s compound was accessed by a steep, narrow road. From the compound to the site we constructed a scaffolding walkway through the adjacent Long Tower church and graveyard. We worked with the church to minimise the impact of the works, stopping noisy activities during services and funerals.

The centre... does not need me to sing its praises as a treasure of a building, a phoenix arising from ...decay and dereliction
Grainne Mc Cafferty, Aras Cholmcille Chairperson